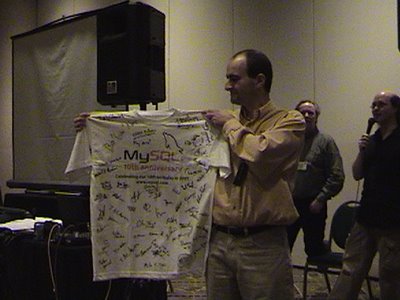 Wow, just got out of a very interesting quiz show at the MySQL Users Conference which took an interesting turn.

Near the end of the quiz show, Arjen announced that the T-shirt signed by all MySQL conference speakers (including me) would be auctioned and the proceeds donated to EFF.

My highest bid was $34 at which my wife was looking at me.

Ronald and Sheeri had other plans. They kept outbidding each other for most part.

Arjen, Monty and Brian kept encouraging the audience to go higher and higher.

Sheeri was very excited once Brian announced that he will create a SHOW CONTRIBUTORS command in MySQL and add the winning bidders name to it. Earlier Brian had shown us how to add custom SHOW commands but before showing us how to add it to the information schema, the session time ran out. Ronald Bradford has a good write up on the Hackfest session. 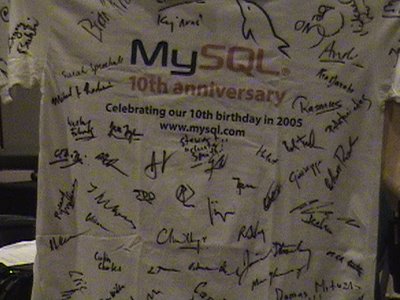 The front of MySQL Users Conference 2006 T-Shirt signed by all speakers. 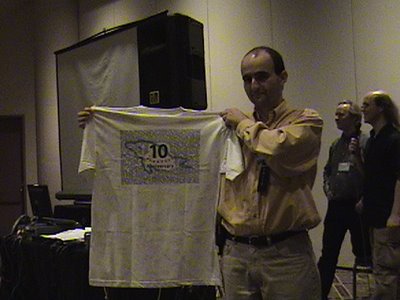 Back of the T-Shirt that is now with Ronald Bradford.

At one point, Jay had to run and ask VP of MySQL to match the winning amount to be donated to EFF. Jay came back and it was announced that if the auction bid reaches $1000, MySQL will match it up with $800.

Ronald, whose almost all questions were unanswered, finally won the auction for a $1000, followed by Sheeri's bid of $900. Sheeri got the signed Stored Procedures book by Guy Harrison.

A lot of peer pressure was attempted on Jeremy Cole, who kept smiling and as cool as a cucumber. He will be matching 10% of the total.

Going back to the MySQL quiz show, Markus and Beat's team scored higher than our team Procasti nation, organized by Sheeri. Earlier in the morning Markus and Beat had me in their team but Sheeri stole me away at lunch. Our team included Eric Bergen of Yahoo!, Matt Lord of MySQL, Domas Mituzas of MySQL, Oscar Rylin, Sheeri and others.

There was popcorn and pizza served at the quiz show.

It was getting really late so we left.

There was a lot of silly joking and laughing making it a night to remember. I made a movie of some parts of the night and will post it eventually.

Sheeri did say that she didn't want wedding flowers.

Congrats Sheeri and Ronald for getting your name in the MySQL source. After spending so much, you guys deserve it.

Colin Charles also has a write up about the MySQL quiz evening.