Tonight, I am attending Startup2Startup Dinner on Dave McClure's invitation (Thanks, Dave!). Chad Hurley, CEO and co-founder of YouTube will be speaking at this invitation only event. I will post more updates on my personal blog or you can follow me on Twitter.
Posted by Frank at 6/26/2008 06:05:00 PM 1 comment:

Ever wish you could have a browser based shell for Google? One that was clutter and advertising free? Say hello to Goosh, one of the coolest service to hit the web. 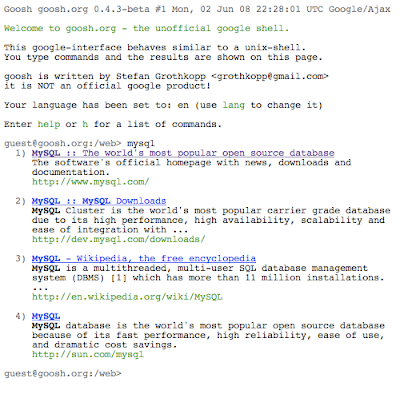 Email ThisBlogThis!Share to TwitterShare to FacebookShare to Pinterest
Labels: goosh

Disaster is Inevitable - Must shutdown generators

Disaster is really inevitable. Even with all the redundant power investments, ThePlanet (formerly EV1 and RackShack), had to shut down their backup generators at their H1 data center on the instructions of the fire crew. This happened after a wire-short in fault transformer led to an explosion that knocked off one of their walls, ultimately bringing 9,000 servers down. Luckily no one was injured.

This just goes on to show that just because a data center has redundant power and backup generators, it does not mean that a disaster cannot happen. IIRC, ThePlanet's last disaster was blamed on backup generators not kicking off properly.

While there was no damage to servers, I wonder how many MyISAM repairs need to be triggered once the servers do come back online?